What is a Farmall Cub? The smallest Tractor manufactured by International between 1947 and 1981. With 9.3 HP and changeable implements for a variety of tasks. Made by International Harvester, under the McCormick-Deering, International or Farmall Name. Long discontinued but a favorite among enthusiasts and smallholder farmers

Why Cub International was Manufactured

At the point when International Harvester was in a full mass production swing, there was still a market that wasn’t being serviced as well as it could.

Most of the range was aimed at the large acreage farms, those dealing with large output and requiring heavy lift machinery. Which of course is understandable as that’s where the money was seen to be.

However, even after WWII, many of the small farm holders were still lagging behind. They were still using horse-drawn means of farming. Why? They simply didn't need the size and power of the larger tractors being produced by IH, Deere, and others, plus the costs to profits ratio didn’t make economic sense. So they just weren’t the target market. Even one of Deere’s smaller tractors, the GM model wasn’t fully taken into the fold by the marketplace.

This is where Harvester International seized a gap in the market. The first Standard Cub rolling off the assembly lines in 1947 opened up an entirely new small-to-medium sized market - and IH had stolen the lead. The smaller size (and presumably smaller price) compared to the likes of the GM model made all the difference to an as yet, largely untapped market segment.

What a Cub Tractor Would be used for

So who would this compact and affordable new tractor model appeal to?

International Harvester was looking to catch the ‘Single Mule’ farmers that were widespread in America’s deep south - and they did. But little did they know that larger farms would also place orders for the tractors, which provided an ideal second vehicle for taking on the smaller tasks around farms.

The Cub tractor thrived within a market where the tractor could economically take the place of horse-driven means and still work to farm budgets.

Of course, now, every farmer wanted to own a tractor, a red Tractor - and they could!

The Cub Tractor came in three original models. However, there were two main variations, the third (New International) being an upgraded model of the International Cub.

The International Harvester C60 was a 4 cylinder Gasoline-Fueled and liquid cooled tractor, with a mere 69-inch wheelbase and simple mechanics. It also provided easy access to all areas aided by a high ground lift.

One defining feature of the Cub was the greater visibility afforded to the driver. By offsetting the driver's seat to the left, and the steering wheel to the right, in a concept called ‘Cultivision’, the driver was provided with a much clearer view whilst working along a field line.

Here’s a quick rundown of the models...

The first in the range went to market in 1947 and was an instant hit. Harvester International had stolen the march on this new market for small to medium farmers and operators and a long run in tractor history was set in motion.

From 1955 the Cub Lo-Boy was rolling off the production lines. Main differences included a lowering of the Standard Cub.

Changes to the model were made to increase the maneuverability of the Cub, so that it had a tighter turning circle for mowing, and lowering the centre of gravity to help prevent any tilt.

So, the housings for the rear axle were rotated which enabled the Cub to be lowered by around 7 or 8 inches - without compromising too much on the ground lift but provided better stability. The front axle extensions were also lowered, as well as shortening the tractor’s wheelbase down to 62 ½ inches.

This version of the lo-boy was succeeded in 1969 by the introduction of the 154 Lo-Boy which adopted the same body style akin to the Cub Cadet Garden Tractor at that time.

The New International was an overhaul of the design, but much of which was unnoticeable. It provided HI the opportunity to use lighter better materials, make some changes and general improvements to the existing models.

Improvements were made to power variations too, all of which resulted in the 185 and 184 Lo-Boy models

The designers didn’t stop there, Harvester International also had an international presence from 1955, with a factory in St Dizier in France. Production there ended in 1964, but in that time from here they produced the Super Cub, affectionately called the ‘French Cub’ - for obvious reasons!

The ‘French Cub’ boasted a more powerful engine and it’s also believed that some of these were built in the Louisville factory too.

For the tractor nerds among us, here are a few of the specifications of the Standard Cub.

The earlier versions of the Cub C-60 engine provided an adequate 9.25 horsepower (6.90 kW) output on the belt and around 8 horsepower (6.0 kW) at the drawbar.

Of course, the color was important too. Every farmer whether a large or small producer wanted to own a tractor. And not just any tractor... looking across to the next field along and seeing your neighboring farmers’ tractor color would tell you instantly what make of Tractor they had. Tractors became something of a status symbol among farmers - so the color mattered.

Then in 1963, IH made a further change, altering the grill to a flatter style, and dropping the Farmall name in favor of International.

Serial number ranges from 99356 through to 106516 featured the white color tractors which were used as Demo Models. These white models were used for demonstration purposes at dealer fayres and gatherings and were intended to be painted IH Red by the dealers once they were sold.

However, some of them were inadvertently sold as white. I can only imagine these are now much sought after models in the current vintage tractor market.

There were a few mainstay attachments available for the Cub, this in part, is what made it such a versatile option that would cater to many needs across a farmers’ duties.

Here’s a quick list of the various attachments available for the Cub - for all models.

For enthusiasts, many of these attachments are still available today, many Cubs have been lovingly restored back to full use. Any attachments that prove difficult to find can be remade as custom built replicas.

Here’s a youtube video of one such restoration project, complete with uplifting rock soundtrack music!

How to Identify The Year of Manufacture

Every enthusiast will know this already I’m sure. But if you’re new to Cub Tractor ownership, or considering buying a Cub Tractor, then it’s a good idea to know the year it was produced. This can affect price and parts availability - as well as the cost of parts

The End of the Cub Tractor Production

The end of an Era spanning more than 30 years was defined by the last Cub model emerging from the production line in Louisville, Kentucky in 1981.

Between the years 1947 to 1981 over 245,000 Cub Tractors were manufactured. The final production runs were made in Red as a final gesture and nod to the tractors long heritage.

Alternative/Competitor Models to the Cub Tractor

There were tractors on the market before the Cub came along, but they were mostly larger and didn’t have the appeal - or the price tag to match the Cub. But later some became major competitors and indeed still hold market share today.

One such tractor was the first Rowcrop tractor made by Deere in 1929 modified from the GP tractor in order to compete with Farmall. It boasted a narrower front end and an adjustable rear axle track.

In 1934 the Model B was introduced which was a third smaller than their Model A. This made it an ideal machine for smaller farms. A few years after that in 1937 along came the Model G. But they still didn’t quite have the nimble small size and perhaps the versatility of the Cub.

Incidentally, Deere company very nearly went bankrupt in the Great Depression. Only a large order of tractors for the Soviet Union kept the company going

Another unsurprising competitor was theModel WC, a tractor manufactured by Allis-Chalmers between 1933 and 1948. From the outset, the WC was designed as a high powered, maneuverable and low-cost row-crop tractor option. 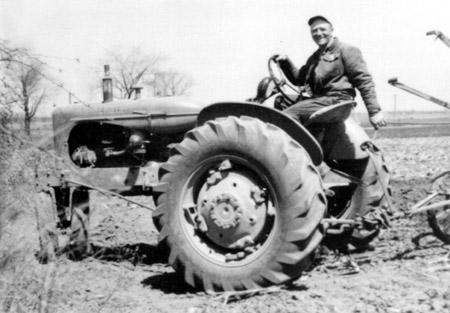 The Cub was, without doubt, an icon of the tractor industry. It helped pave the way for a multitude of modern-day small utility vehicles and tractors which still, even now, cater for small farm tasks and even building sites. Arguably one of the most widely loved and popular tractors ever built.

Not only are they still in action on many smallholdings to this very day, but the Cub has secured a permanent fixture in tractor history books, kept alive by the many enthusiasts that restore and display these stalwarts of the farming industry from the last mid-century.

Lest we forget, Cub owners we commend you, keep those engines coming to tractor displays, and raise your 94-inch loaders in salute!

I hope this article was helpful. It would be great to get your feedback on this, tell us your thoughts on the Cub Tractor and how you see it. Do you own one perhaps? Let us know in the comments below.

My dad, Elmo Ragsdale, Sr., was a horticulturist with the University of Georgia Extension Service in Athens, Georgia until he retired in 1955. After WWII, “Victory Gardens” helped families recover from the depression and the war. He bought a “new” demonstrator cub in 1947. I recently bought a 1955 model just for memory’s sake. I got it cheap but the engine has no compression and needs to be overhauled. I’m 80 years old and having a good time doing it!

Proud owner of a 1951 cub my father owned a 1946 b. Article was very interesting. The size of the cub is awesome I wouldn’t be able to get a b through my shed doors. My father owned a Minneapolis moline v cubs size. My cub is my pride and joy Can’t wait to push SNOW with her. Thanks for sharing your information with us

I have one , not sure of the year but I’m needing information on the complete installation of the belly mower, any help would be appreciated . Thank you !!!

Comments will be approved before showing up.

I absolutely love the IH vest, fits perfectly and extremely well made

Purchased the IH Field Jacket and it's a great coat. The fit is perfect. The length the coat and sleeves long enough to make the comfortable. Also shipping was fast. Very happy I purchased this coat.